Brought to you by Brainstorm, in partnership with MTN Business

As technology has taken centre stage in revolutionising the business landscape, so has the CISO. As companies' Cloud migration and digital transformation strategies have accelerated, the need to protect corporate networks, digital assets and other critical infrastructure from cyber attacks has become mission critical. Moreover; with the advent of intensified implementation of remote and hybrid working, the attack surface has widened substantially, which has led to a proliferation of cyber breaches and ransomware. All these changes continue to be experienced by entities as they evolve to being digital organisations, have led to cyber security becoming an essential investment in the future sustainability of every business.

To reflect on these changes and how they affect the operations of the CISO and his/her position and role within their organisation in order to be able to properly strategise, ITWeb, in partnership with MTN Business, have commenced South Africa’s first industry-wide cyber security survey.

The results of this definitive annual cyber security survey will be released at this illustrious gathering, the inaugural ITWeb Security Summit CISO Banquet 2022.

Don’t miss the chance to gain access to this ground-breaking research, and network with the South African CISOs and other relevant c-suite executives who participated in the survey. 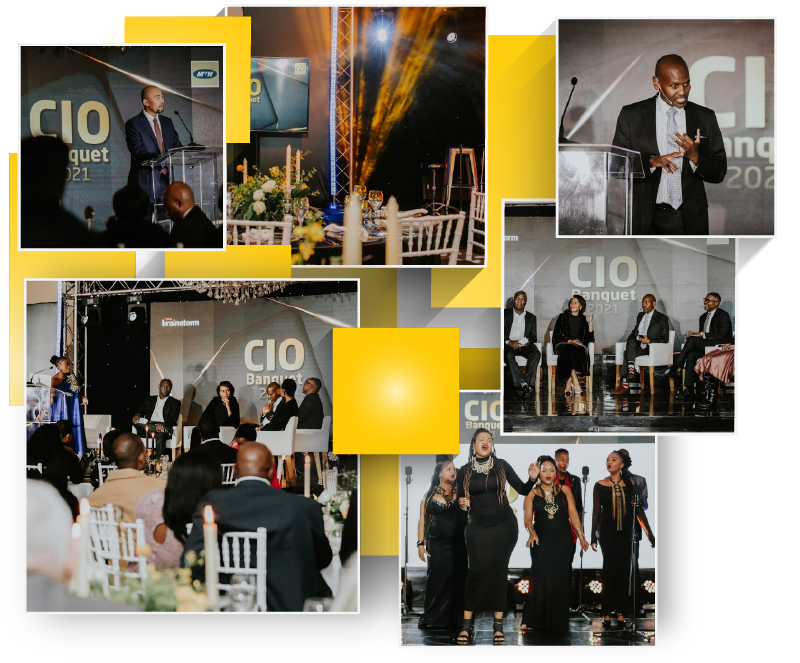 Providing insight into the priorities and concerns of SA's top public and private sector CISOs Don’t miss the chance to gain access to this ground-breaking research.

Secure your table at this prestigious virtual event.

The survey captures input from CISOs and other equivalent C-level execs, and results in an exclusive research report that provides unique insights into cyber security strategies of SA's top private and public sector organisations.

The key findings of the 2022 survey will be revealed at the first ever ITWeb Security Summit CISO Banquet 2022, which will take place both at The Polo Room, Inanda Club on Tuesday 28 June 2022.

The full research report will be published on ITWeb and Brainstorm online later this year. The report is available free of charge to all valid survey respondents.

About The Polo Room

The Inanda Club was founded in 1934 with the purpose of providing a home for equestrian sports. The club was located in, what was then, the countryside north of Rosebank and it is doubtful that the founders imagined that the area would become the commercial CBD of Africa.

However urbanisation followed those pioneers and rather than being swamped by development, the Inanda Club has evolved the Sandton venue into a modern city club with a distinct equestrian and country character. This town club, combined with the Inanda Country Base in Kyalami, provides premier equestrian facilities fulfilling the objectives of the founding sections of Polo and the Rand Hunt.

This unique club now offers much more, with facilities that have a wide appeal. In addition to the equestrian sports, the club has a gym, tennis courts, a swimming pool, two bars, restaurants, lounges, meeting rooms, accommodation and a spectacular, large function venue.

More about the venue

Launched in 1994, MTN South Africa is a subsidiary of MTN Group, a leading emerging market operator with a clear vision to lead the delivery of a bold new digital world to our customers. We are inspired by our belief that everyone deserves the benefits of a modern connected life. The MTN Group is listed on the JSE Securities Exchange in South Africa under the share code ‘MTN’. Our strategy, Ambition 2025, is anchored on building the largest and most valuable platform business, with a clear focus on Africa. MTN Business, the Enterprise Business Unit (EBU) of MTN, whose global footprint spans 19 countries in the Middle East and Africa, is leading emerging markets into this bold, new digital world.

Sophos makes IT security simple. Focused on innovation in next-generation protection, Sophos solutions are simple to deploy, maintain, and manage, enabling organizations to protect and defend their networks, their information, and their people. Sophos — Security made simple.

DNSSense is a DNS Layer Security Platform focused on actively protecting all devices in the network against any type of malicious activity including phishing, ransomware, and zero-day attacks. DNSSense provides advanced DNS traffic analysis of all devices in the network, including IoTs. Rule-Based SIEM integration provides filtered, enriched, and understandable DNS logs & threat intelligence to SOC teams, which also decreases DNS EPS costs. DNSSense receives DNS traffic from over 10000 enterprises as well as 1 million unique users from 76 countries every day.

At BCX, we pride ourselves on being one of the leading South African end-to-end digital partners for corporates and enterprises across the African continent, within the Private and Public Sector. As a wholly owned subsidiary of the Telkom Group, we aim to become the number 1 digital partner of choice for clients within our chosen markets. BCX drives business results by helping our clients place their customer at the heart of their organisations. Enabled by our technological capabilities such as converged communications, cloud services, industry solutions, cyber security and digital edge, BCX will innovate solutions to deliver exceptional value through better experiences along the value chain. To do this we combine local market understanding and deep industry expertise with some of the world’s most advanced Information and Communication Technology, together with a tireless commitment to make your unique digital journey as seamless as possible.

Veeam® is the leader in backup, recovery and data management solutions that deliver Modern Data Protection. The company provides a single platform for Cloud, Virtual, Physical, SaaS and Kubernetes environments.

Palo Alto Networks, the global cybersecurity leader, is shaping the cloud-centric future with technology that is transforming the way people and organizations operate. Our mission is to be the cybersecurity partner of choice, protecting our digital way of life.

First Distribution is the leading value-added distributor in Africa. Our offering includes a product portfolio of global leading Datacentre, Cloud, Networking and Security products and services. This embraces hybrid solutions with access to any combination of on premise, private cloud and public cloud end-to-end solutions from multiple vendors. The portfolio, together with highly skilled staff to support and manage vendors with an unrivalled level of expertise, ensures that our partners have the key elements required for success. First Distribution additionally hosts one of the largest technology partner-to-partner networks in Africa allowing partners to extend the reach of their solutions across the continent.

Obscure Technologies was founded in 2016 by a group of specialist security professionals whose combined IP and experience has been gained through working for and with global IT and security giants, over the years. We specialise in bringing the world leading security solutions to market. Obscure Technologies operates throughout the African continent. We remain at the cutting edge of world and local security technology trends through our relationships with leading vendors and as such enhance our IP and expertise on an ongoing basis. We deliver end to end innovative technology solutions to our partner community

NEC XON is the combination of XON, a Systems Integrator providing custom ICT and security services and solutions in Southern Africa since 1996 and NEC Africa, the African business of the global technology giant NEC Corporation. NEC Corporation implemented its first communication solution is Africa in 1963 and established NEC Africa in 2011 to grow its business ICT and public safety. The combined NEC Africa and XON (NEC XON) operations seek to more fully explore the opportunities for safe city, energy, cyber security, telecommunication solutions, retail, energy, managed services, cyber defence services and cloud (both public and private) among others in sub-Sahara Africa.

Tenable® is the Cyber Exposure company. Approximately 40,000 organizations around the globe rely on Tenable to understand and reduce cyber risk. As the creator of Nessus®, Tenable extended its expertise in vulnerabilities to deliver the world’s first platform to see and secure any digital asset on any computing platform. Tenable customers include approximately 60 percent of the Fortune 500, approximately 40 percent of the Global 2000, and large government agencies.

Forescout Technologies, Inc. actively defends the Enterprise of Things by identifying, segmenting and enforcing compliance of every connected thing. Fortune 1000 companies trust Forescout as it provides the most widely deployed, enterprise-class platform at scale across IT, IoT, and OT managed and unmanaged devices. Forescout arms customers with more device intelligence than any other company in the world, allowing organizations across every industry to accurately classify risk, detect anomalies and quickly remediate cyberthreats without disruption of critical business assets. Don’t just see it. Secure it.

Okta is the leading independent identity provider. The Okta Identity Cloud enables organizations to securely connect the right people to the right technologies at the right time. With more than 7,000 pre-built integrations to applications and infrastructure providers, Okta provides simple and secure access to people and organizations everywhere, giving them the confidence to reach their full potential. More than 10,000 organizations, including JetBlue, Nordstrom, Siemens, Slack, T-Mobile, Takeda, Teach for America, and Twilio, trust Okta to help protect the identities of their workforces and customers.

Our consultant level experience in solution design is provided to a number of South African enterprise customers. Our experience is based on complex hardware and software configurations that include architecture & design, performance tuning & capacity planning and solution implementation and support. With this background ITgility is uniquely positioned to assist any size business in delivering roadmaps to our customers, narrowing the gap between Business and IT requirements to operate at industry best practice standards. This approach will enable your business differentiation in the market place. Our consultative led roadmap approach will allow you to plan ahead and achieve better efficiencies through this approach.

VMware software powers the world’s complex digital infrastructure. The company’s cloud, networking and security, and digital workspace offerings provide a dynamic and efficient digital foundation to over 500,000 customers globally, aided by an ecosystem of 75,000 partners. Headquartered in Palo Alto, California, VMware is committed to being a force for good, from its breakthrough innovations to its global impact.