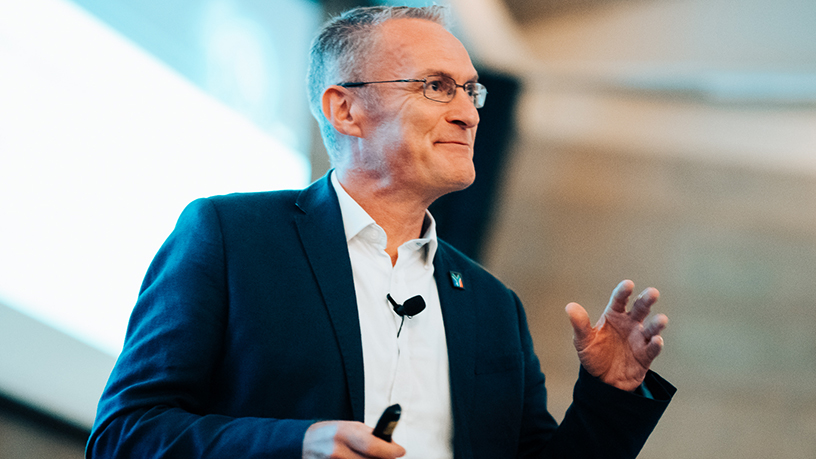 Every organisation needs to be modernising to stay competitive and relevant as there’s a steady flow of new entrants into every businesses market. And IT needs to become agile, flexible and scalable as it supports and aligns to business objectives, with the acceleration of application development key to remaining competitive.

So says Dave Funnell, manager: Cloud Provider at VMware, during his keynote address on ‘accelerating the application journey’ at the ITWeb Cloud, Data Centre & DevOps Summit, happening today at The Forum in Bryanston.

He says over the past couple of years, the conversation has been about the journey to the cloud.

“’How are we going to get to the cloud?’, they ask. However, people are creating this destination of the cloud, without actually knowing why they're going, and this is where they can run into problems.”

According to Funnell, it's really about the application – understanding the applications that you're running today, and the ones you’re going to be running in the future, and then deciding on the right platform for those applications.

And it’s all about business, he adds. Every year there are new threats to the business and there’s new customer demand.

“There are really three initiatives - or three priorities - for any business: time to market, agility and cost management. This means bringing new products to market as rapidly as possible, and this is all based on applications.”

It’s the speed at which you can bring applications to market that makes make your business competitive, says Funnell. New applications also help businesses engage more effectively with their users. “

Alongside this, more and more pressure is being put on IT professionals and how they deliver to the business. “There are increasing demands being made, we’re going to have to work harder and faster to speed up time to delivery - and deliver the required user experience,” he says.

Funnell says according to the IDC Spotlight, there are about 300 million applications in production today, but by 2025, there will be 800 million. This means there are 500 million new applications coming.

“We've got no idea how we're going to be interacting in five years’ time. We just know there's going to be more and more applications there. It's really quite frightening, thinking about going from 300 million to 800 million applications.

“Now I doubt anyone in this room is going to have their IT budget go up two and a half times, or their number of employees, so they are going to have to do more with less. You have to be more efficient,” he says. “IT will not be able to deliver those extra 500 million applications, working in the same way that it has been, and delivering to the business in the same way that it always has.”

“But thankfully there is help available, and the way we can embed an application today is changing. Twenty years ago VMware was formed, and virtualised enterprise applications probably about 14 or 15 years ago, so businesses could run production enterprise apps on x86. At one point we were saving customers $10 billion a year in costs. We're probably the first green IT company.”

“These traditional applications – Web tier, application/middleware, and database tier – are on the backend. And we’re leveraging across from shared databases, to applications with microservices. That's what’s sexy today. That's what it's all about. That’s what is accelerating application development, and where we can build those 500 million more applications that we need to bring to our business.”

Today, more apps can be developed faster and with less resources, says Funnell, citing an analysis of a Kubernetes customer that saw a 37% increase in developer productivity, and 82% less time to get development code into production, through a continuous integration processes. It also noted a 50% reduction in public cloud resources.”

So is the solution to just move everything across into these new apps, use microservices and all our problems go away?

“Everything is cloud, but those other 300 million existing apps aren’t going away.”

Funnel uses a cats vs chickens analysis to illustrate the difference between traditional and new applications.

“If you have a cat, you feed it, take care of it, send it to the vet when it’s sick. Much like every cat, each application must have its own profile. You really care about these applications, but you can't scale them.”

But the new apps are more like chickens, and that’s why they are so powerful, he said. “The farmer doesn’t actually care about the chicken itself. He cares about the yield of eggs. That’s what these new apps are about - continuous deployment. If they stop working, you take them out back and figuratively wring their necks.”

Yield is what counts, and that is more or less what people are looking to do, to use these new apps and get on that journey to the cloud. “It seems such a compelling answer to all the problems, but in reality it’s a little bit more complex and a little bit more nuanced.

“If you just want to move one or two workloads it’s very easy to move into the cloud. However, if you’ve got complex applications that are integrated into other services, your delivery is not as simple,” he says.

Cost optimisation in public cloud is a big problem, too. “You have to understand what you're spending, why you're spending it and how to minimise that spend. There are application management tools and security tools to help with this. If I look at research from last year, 85% of organisations are still repatriating workloads. That's a huge number. They’ve made a move to migrate workloads to the cloud, but had to bring some of those workloads back.”

There's no business benefit to merely ‘lifting and shifting’ applications to the cloud, without any change in the functionality. What businesses need is a platform that is optimised to deliver current applications so they can focus on new application development.

“What businesses need to do is free up resources to focus on app development for those 500 million new apps, and have someone else look after those 300 million that are running today.”

What no business wants to be doing is worrying about buying infrastructure, making sure that infrastructure is running, and making sure data centres are right. They want someone to run those apps for them, and get them onto that platform as quickly as possible, so they’re not hindered in new application development, because they're spending too much time migrating existing applications.

“So it's a winning world this cloud world,” he concludes.